During the conceptual design studies that NASA often performs, there is a need to bring reliability predictions into the screening process as one of the evaluation metrics (along with mass, power, cost, and any other metrics). Since detailed subsystem descriptions are generally unavailable during the conceptual design phase, a good deal of experience is required to estimate component failure rates based on mission duration, on-off cycles, degree of redundancy, and similarity of novel new parts to historical database components.  By performing such system-level reliability analyses, N&R has contributed to design decisions made by NASA for next-generation launch vehicles and interplanetary spacecraft including the Earth Departure Stage (EDS) and the Orion Service Module.

System reliability analyses usually begin with the definition of sub-system schematics that are provided by discipline experts. Sometimes these are quite detailed, but often they are just rough guesses at a potential configuration. For conceptual-level design studies, we define a reliability block diagram that identifies the major sub-systems and the critical events that must succeed to ensure mission success. Then individual failure rates are ascribed to each event and these are rolled-up into a system-level failure probability – either via a formal fault tree analysis or an approximate, but rapid spreadsheet failure model.

The end result is usually displayed in a tabular form that summarizes the sub-system contributions to the overall system failure probability, along with the loss-of-mission (LOM) and loss-of-crew (LOC) probabilities.

Ares I-X launch vehicle USS – The N&R staff applies a variety of commercial and in-house structural analysis codes to perform both deterministic and probabilistic structural analyses. High-temperature/high-stress composite material structures are a specialty that we have handled for both NASA and the aerospace industry.  A recent example involved the next generation launch vehicles slated for development by NASA designated under the Ares project. The first test vehicle was successfully launched during the (spring of 2009) and simulated an upper stage of the Ares I launch vehicle. This simulated upper stage structure is not the operational flight version since it does not contain an active propulsion system. However, the Upper Stage Simulation (USS) does have the same dimensions and overall mass properties to simulate the behavior of the real upper stage.  Designated Ares I-X, this test vehicle’s launch verified the performance and flight dynamics of the active first stage.

The USS primary structure consists of a series of stacked steel “tuna cans” welded and bolted together from mild plate steel. Because concerns were raised regarding the structural integrity of the welded joints of this structure, N&R was contracted to perform a probabilistic analysis of this primary structure to identify the critical stress locations and, more importantly, to determine the catastrophic failure risk of un-detected welding flaws.  This required detailed modeling of the welded joints, and the application of crack-growth modeling tools, as well as our probabilistic code to determine failure probabilities.

The final results demonstrated that the failure probability from un-detected welding flaws is not very large, thus giving NASA program managers confidence that the Ares USS is structurally sound given the estimated loads. NASA was grateful to N&R for their contribution to resolve this major uncertainty. 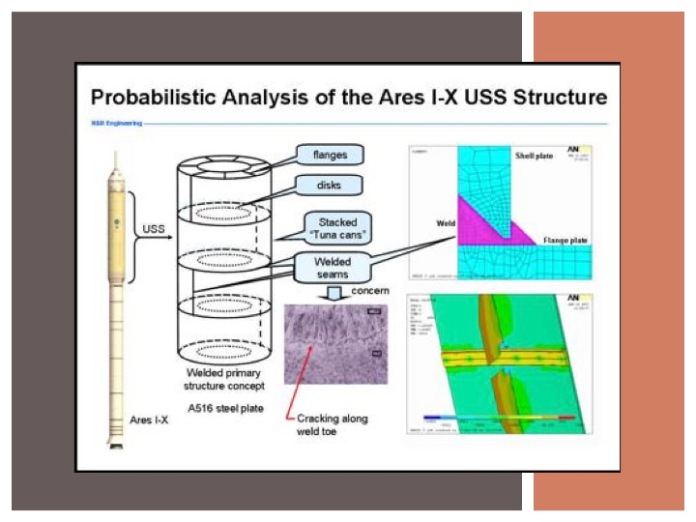 > Back to Completed Work